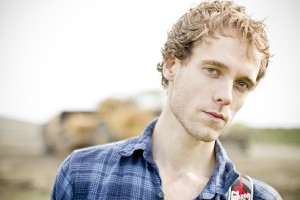 Dan Kosub is a prolific singer/songwriter who has been a tenacious presence in the Canadian music scene for over a decade.

Kosub is a roots singer/songwriter at heart who has been compared to every road-dog troubadour from Cat Stevens, to Jason Aldean, to John Mayer.

In recent years, Kosub has accrued a number of career milestones. Having toured relentlessly, he has performed at countless premier venues and Canadian festivals (TIFF, Rifflandia, Rock of the Woods, five years at Canadian Music Week, and many more.) Additionally, Kosub has received heavy rotation on Canadian television of his single “Blue & Grey” (Reservoir, 2008) and a hard-earned spot on the Mediabase Alternative rock charts for his single “Aurelia” (Jacob’s Island, 2011).

In early 2015, Kosub released his third record Blood Honey Moon, produced by Winston Hauschild (Hannah Georgas, Hey! Ocean, Wanting) a three-song EP that delves deeper into his love of pop, roots, and politics. The record’s leading single is “Reason to Go”, a catchy acoustic driven downbeat groove, followed by a moving political balled entitled “Infantries of Love, and a trip-hop inspired look at dystopian city-life entitled “After the Wave”.

In 2017, Kosub invested in a studio and released his first self-produced record, taking his music in a country-fried direction, with the lead single “Rocks & Gravel” inspired by the touring on the baron Canadian prairie backroads in July.

Kosub’s Rocks & Gravel and Blood Honey Moon EP’s were featured heavily in the 2017 Harlequin movie A Very Country Christmas, with songs including his new single You Are My Home and Reason to Go. Kosub was also featured as the singing voice of the main character, country star Zane Gunther.

In 2018, Kosub has embarked on a lengthy tour of Canada, starred as the lead in the musical Once in Chemainus BC, and revived his role as Carl Perkins in the original Canadian cast of The Million Dollar Quartet. He will tour eastern canada behind Rocks & Gravel in the fall.