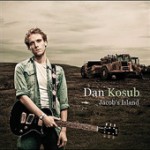 Jacob’s Island kicks off with the tuneful indie-pop groove of “Til I’m There” followed by the rock anthem “Aurelia,” which last year earned a presence on Canadian Mediabase Alternative Rock charts. The song muses on the fate of stars crushed beneath the weight of their fame. “On this record, I also delved into subject matter I didn’t think would emerge for another few records,” explains Kosub, referring to the emotive “Fifteen Summers” penned on the 10th anniversary of his mother’s death.